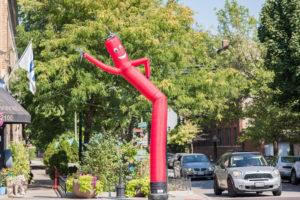 One Wacky Story: The History of Air Dancers

They're a feature firmly affixed to the landscape of American small business marketing tools. Air dancers are as ubiquitous in local advertising efforts as sign twirling sidewalk salesmen or furry dancing mascots. And the reason for their popularity is pretty simple: they work.

Air dancers are popular because they draw a potential customer's eye. They're beloved by car dealerships for that very reason. Set one up alongside a few new cars, toss in some signage, and you have effective low budget roadside marketing. The kind of marketing that gets people looking directly at your on-hand inventory.

Their popularity as marketing tools makes them instantly familiar to American consumers. The air dancer is known by many names —sky dancer, fly guy, tall boy, inflatable man, tube man, or wacky waving inflatable arm flailing tube man—it doesn't matter what you call them. People pretty much always know precisely what you mean. And that's the sort of popularity that perpetually feeds into itself.

Of course, nothing as popular as air dancers can exist these days without a hearty helping of controversy. And our wacky inflatable friends know their fair share of that, to be sure. Even fun, lighthearted, campy air dancers have a contentious background.

The Birth of Air Dancers

There's been quite a bit of debate over the origins of air dancers, but two men share credit for their design. Two men who almost ended up in a court room. And who deserves credit is really open to your own interpretation of their stories. 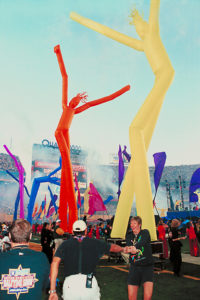 Peter Minshall was a famed Trinidadian artist, whose work from the 1970's through the 2000's challenged Carnival traditionalism. He's perhaps one of the most famous denizens of his native Trinidad and Tobago, and was the subject of the 2010 documentary Mas Man. Minshall had extensive experience working with puppets, including massive light-framed ones very closely resembling modern air dancers.

Doron Gazit of Los Angeles (originally hailing from Israel) was also a famous artist and engineer, known for his epic environmental art installations. Like Minshall, Gazit had a background working with art pieces resembling air dancers; his career in entertainment started on the streets of Jerusalem as a balloon artist.

Minshall was commissioned to develop art for the 1996 Summer Olympics in Atlanta, Georgia. The story goes that Minshall conceptualized air dancers, which he called "tall boys," and then enlisted the help of Gazit to bring his creations to life. That's how the air dancers were born. And that's also where the controversy begins.

A Scandal in the Wind

After the Olympics, Minshall and Gazit went their separate ways. but while Minshall returned to the world of Carnival, Gazit and his company Air Dimensional Design headed to the patent office to secure the rights to what he called "fly guys." And he never told Minshall he was doing it, either.

It took a few years, but Gazit eventually claimed the patent to air dancers for himself. Before long, he was licensing his product to manufacturers eager to capitalize on their marketing potential. And Minshall was none the wiser, despite Gazit openly admitting Minshall conceptualized the air dancers.

Minshall and Gazit nearly ended up in court over the issue, but eventually settled their dispute privately. In the years that followed, Minshall continued his work with Carnival, while Gazit's company has become wildly successful in marketing not only air dancers, but other commercial inflatable art installations, many of which have been used by big name enterprises.

The Inflatable Air Dancer Flails On

Despite a seemingly rocky and legally contentious period, air dancers have generally continued their sprint in popularity, both in the United States and abroad.

They've been prominent features of marketing campaigns big and small, and have made a number of return visits to the art world as well. They've been used in the agricultural industry as scarecrows, too; their erratic movements mixed with the humble drone of their air movers have shown promising results for keeping birds away from crops.

Air dancers are simple, low maintenance, and highly effective for marketing (and other purposes, too). So despite their somewhat troubled origin story, it's a safe bet air dancers are going to remain a mainstay in our contemporary advertising landscape for a great many years to come.