The store will not work correctly in the case when cookies are disabled.
Menu
Account
Epic Inflatables: The World’s Biggest Bounce House 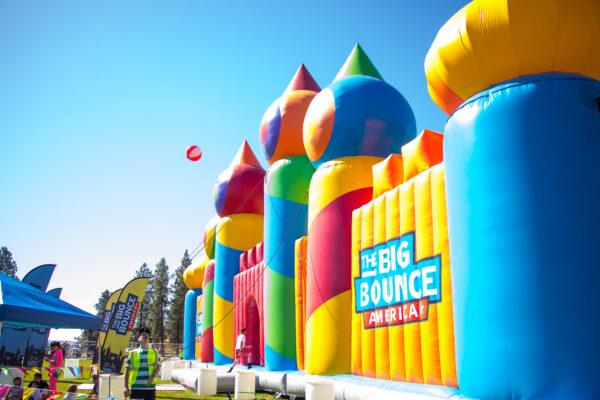 The World’s Most Epic Bounce House is Bonkers!

It’s been a while since we’ve added a new entry to our Epic Inflatables series. So today, we wanted to pay a visit to an epic inflatable of staggering proportions. Let's meet the world’s biggest bounce house, which tours North America each year. 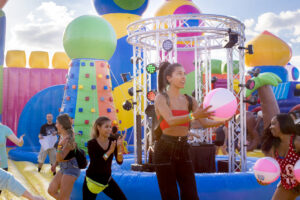 Measuring 11,433 square feet with a capacity of 180 to 200 guests, The Big Bounce America is certified by the Guinness Book of Records to be the world’s largest bounce house.

The Big Bounce America tours with a 900 foot inflatable obstacle course, accompanied by other large bounce houses and slides. They need a fleet of tractor trailers to move it all around, making The Big Bounce, at least unofficially, the world’s largest touring inflatable park as well.

Like so many of the world's greatest innovations, The Big Bounce was born almost accidentally. And yes, it did involve a little drinking. It all happened after a music show many years ago, when two Scottish gents brewed up an idea. 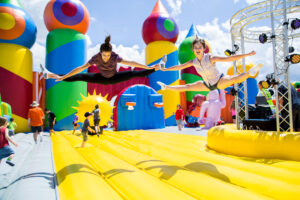 In an interview with TODAY Home, Creators Cameron Craig and Grahame Ferguson said they were working at a music festival in the United Kingdom when the idea struck them. That festival had a commercial bounce house set up for children to play in, which Craig and Ferguson (two individuals; not to be confused with Scottish-American comedian Craig Ferguson) bounced around in after everyone else had gone home.

The duo had a lot of fun in the bounce house. So much fun, in fact, that they started to envision creating an adult bounce house of their own. And the more involved their idea became, the bigger and grander it had grown. They soon enlisted the help of their creative team, as well as a manufacturing company in Ohio. And after 18 months of labor, the team debuted their creation with a North American tour in 2017.

The 2020 tour began in Miami on January 28th. And you can be sure some of the Tent and Table crew will pay this behemoth a visit when it rolls through Buffalo later this year as well. As a company that produces inflatables including large bounce houses, inflatable water slides, inflatable games, and inflatable obstacle courses, we can definitely appreciate all of the hard work that went into building this brilliant monstrosity. The world's biggest bounce house is definitely impressive, and we can't wait to give it a jump!

All photos courtesy of The Big Bounce America, used with permission