The store will not work correctly in the case when cookies are disabled.
Menu
Account
Who Invented the Folding Chair? The History of Party Chairs 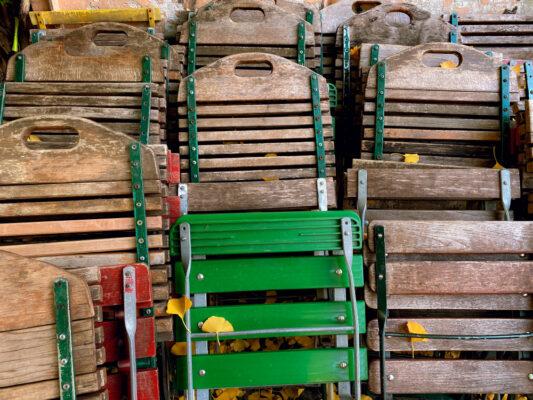 Do You Know Who Invented The Folding Chair?

Here’s a question I’m sure very, very few of you who regularly read this blog have ever asked. Who invented the folding chair? I know … it seems like a boring subject, doesn’t it? But folding chairs are wildly ubiquitous.  It’s hard to find a home, a store, a school, a church, a gas station, or a hospital without them. They’re everywhere and we use them for everything.

It’s that familiarity and prevalence that makes party chairs so uninteresting to us. You can buy one for peanuts and keep it out on your porch or patio for three hundred years and never think twice about it. You probably have folding chairs in your home right now that you couldn’t describe with much detail without cheating. They’re little more than background actors in our day to day lives.

Of course, if you work in the party and event rental industry, you probably care about folding chairs a little more than the average Joe. Party chairs are huge money makers for a rental business. Tent and Table sells more party chairs than any other product. That ubiquity we mentioned earlier makes them profitable for rental companies, for sure.

Someone out there in history—perhaps multiple people, even—deserve(s) credit for such a popular product, right? So let’s find out who invented the folding chair and dish up some kudos. 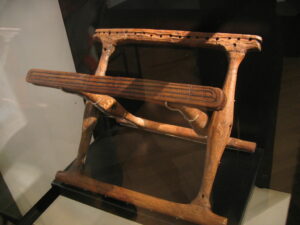 An ancient folding chair from the Nordic Bronze Age of the 14th century B.C. Courtesy of Wikipedia

Here’s a pretty big spoiler alert for the rest of this article, and it's a decent “TL;DR” summation, too: multiple people deserve credit for the invention of folding chairs. And the first set of kudos goes way, way back into antiquity.

Folding chairs have been around for thousands of years, with some dating as far back as the 15th century B.C. Examples could be found in ancient Rome, Greece, Egypt, and Minoa. Though back then, folding chairs were reserved for only the most prestigious of buns. Unless you were royalty or a patrician, your hind end was relegated to less dignified, lower quality seating (insert a subtle, jestful jab toward our competitors here).

Folding chairs were used by the ancient Romans, Greeks, Egyptians, Minoans, and Norsemen. They were usually simple in design—an “X” shape with some cloth, fur, or thatch over the top—and usually made from wood. A far cry from the advanced polypropylene resin folding chairs we offer today.

In the middle ages, folding chairs became a little more accessible as churches began using them around Europe. Their use continued to slowly spread into popularity over the centuries, until they eventually made their way here, to the United States. 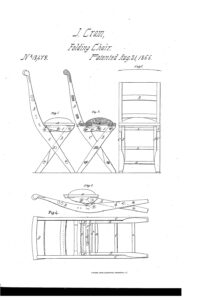 Fast forward to 1855, and an American inventor in Boston named John Cram patented what was arguably the first folding chair to resemble the modern ones we use today. In Cram’s patent filing, he mentions an earlier patent by one J. Middleton, though we couldn’t find any patent predating 1855 from an inventor by that name, or any patent related to folding chairs.

In the wake of Cram’s patent, countless other folding chair patents have been filed, with a wide variety of alterations and features, most of which contributed big or small to our modern party chairs.

Philip E.G. Harrison patented the first truly modern folding chair in 1931. His chair featured a metal frame with a fabric seat and back; we’d recognize his invention today as a party chair. But his design was fairly complex, making mass production difficult. Fredric Arnold filed a patent in 1956 for a simple, easily-mass produced folding chair more in line with the ones we know today.

Who Invented the Folding Chair? Lots of People, That’s Who

We can’t really answer the question of who invented the folding chair with a single name. Folding chairs date back to antiquity, and there have been countless upgrades and alterations made to them through the years. And that’s just counting the patented iterations!

If we really needed to specifically name who invented the folding chair, we’d have to give credit to four men in particular:

Of course, modern party chairs would be wildly different today without the contributions of John Dann, Tobias Miller, and all the countless other inventors who’ve improved on the design of folding chairs dating all the way back to the 1800’s. Without their work, we’d still be sitting on those uncomfortable “X”-shaped folding chairs of yesteryear.

Knowing who invented the folding chair and crediting them for their contributions may not seem like it’s all that important. But these guys (and so many others) created a product known and relied upon the world over. It’s hard to have lived in modern society for very long without your tush having graced a folding chair at some point. So the next time you’re having a drink, raise one up to these guys for their tremendous impact on our modern party and event rental industry.